One Million for Me and None for You

How vulnerable are your leadership skills to self-deception? 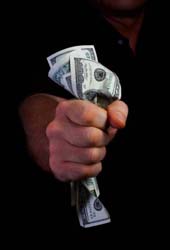 Imagine you're the President of a thriving technology company. You work to attract the best and brightest students for summer internships. Your goal is to evaluate their potential for permanent positions.

One day one of these interns knocks on your door with an idea. You decide to implement it and the idea ultimately adds a million dollars to your company's bottom line. This isn't a hypothetical example, but is instead a true story.

How should you reward this employee?

First, consider the legal angle. You agreed to compensate the intern for their work. You owe them nothing more or nothing less than the agreed upon amount, regardless of their performance. As the business owner, you're burdened with the risk and are fully entitled to the rewards. From this standpoint, the million dollars is all yours.

So what happened in the real life version of this story? Believing that performance bonuses are problematic, the President was against providing a monetary reward. Instead he offered the student shares of company stock contingent upon him accepting a permanent position at graduation.

The President was open about the fact that the stock, issued by a private company, was "hard to value". Not surprisingly, the employee declined the offer.

Of course, this isn't a performance bonus issue at all, but rather an ethical one. At the time of the compensation agreement, no one anticipated the extraordinary results that would dramatically exceed even the most optimistic expectations.

It's under just such unexpected circumstances that leaders have the duty to seek an equitable solution and do the right thing.

There's also a practical consideration. Given the intern's demonstrated abilities, what further contributions might he have made if the offer had been different and he'd accepted a permanent position?

Was the President's offer based on sound business judgment or self-deception? What would you have done?