« Taming Your Inbox, Part I | Main | Technologies Poised to Transform your Business and Life »

Is Implementation More Important than Invention? 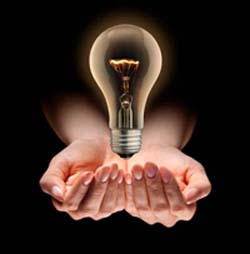 After inventing the light bulb, Edison faced a monumental hurdle. What good is a light bulb to homes without electricity? What was the greater feat, his invention or the establishment of the supporting technologies and infrastructure that made it useful?

For centuries, man contemplated "flying machines". During the Renaissance, Leonardo DaVinci sketched designs for several, but none ever left the ground.

Burned indelibly into our memories as the fathers of flight, the Wright brothers finally broke the barrier centuries later on December 17, 1903. With Orville Wright at the controls, the first flight lasted a mere 12 seconds . While he and his brother achieved instant fame, commercial success alluded them. That didn't stop others from quickly capitalizing on the newly proven concept.

Today's aircraft would probably be unrecognizable to the Wright's. In the intervening years, implementation - an amalgam of incremental improvements, supporting inventions, design decisions, integration with other technologies, better scientific understanding, and the development of a supporting infrastructure were some of the elements that delivered aviation as we enjoy it today.

The Wright's invention demonstrated that a machine could fly. Thousands of other innovators, most whose names are lost to history, contributed everything else.

When Tony Hsieh started Zappos, he didn't invent anything new. There was certainly nothing novel about selling shoes or even selling over the internet. Rather he used existing technologies to provide value in a new way.

If you're inclined to invent, the world is waiting. Don't delay.

For those of you that aren't, don't downplay the value of implementation. Finding new ways to make existing technologies more useful, combining them in new ways or finding small ways to incrementally improve them can yield more value and usefulness than the initial invention.

While the fame may go to the inventor or researcher, should more credit be given to those whose vision delivers an invention's value to the world?